By Scott Briones
233
Best of the Best

Best Bongs and Weed Vaporizers to Buy in 2020

Best Cannabis Products and Accessories to Buy in 2020

Josh Camitta is co-founder of MJ Arsenal, @MJArsenal420. A former professional golfer also employed in sales and operations for the world-renown PGA Tour, Camitta is an avid cannabis product designer.

His first invention, The Grale, enabled MMJ patients and responsible recreational consumers to identify their ideal flower dosage based on the weight and strength of their cannabis.

In 2014, Josh was issued his first patent on The Grale covering a proprietary grinding and weighting function for all vegetative materials.

In 2016, along with a friend, Josh conceived Mary Jane’s Arsenal (MJA), helping source the company’s popular debut product, the Wand.

Taking on more leadership responsibilities for MJA, Josh began development of his original Blunt BubblerTM and Joint BubblerTM concepts under the MJA umbrella, selling more than 50,000 units their first year in operation—including patents issued and pending for utility and design.

Today, MJA’s line of coveted and collectable original blunt bubbler and joint bubblers, alongside their trademarked mini rigs are sold in over 1600 storefronts in the United States as well as many other retail establishments spanning four continents.

We got a chance to interview Josh and learn more about his history and his bubblers. Read the full interview below.

Ganjly: What is your background and how did you end up in the cannabis industry?

Josh Camitta: Starting in 2009, myself and a friend came up with the general concept for The Grale, which is a grinder scale that weighed cannabis simultaneously as it is ground. I have always been very focused on consumption and more specifically what the “ideal” dosage is.

In addition to the medicinal markets, I felt that there was a need for a “shot glass” for responsible adults to accurately use cannabis as they would any other household libation.

My first official career was in the professional golf industry. From corporate golf (PGA TOUR), to teaching, to playing as an entry level professional, I pretty much wore every hat there is in the golf world.

Throughout this time, I grew a passion for product design, especially in the ancillary cannabis world and kept inching The Grale closer to reality.

In the twilight of my golf career, I happened to check my email during an especially rough tournament round. I received word that my first patent was issued—my focus was forever changed.

This was 2014. About two years later, The Grale was ripe for a remodel and this is when MJ Arsenal was founded, in Summer of 2016, and ultimately, MJA took over my life very quickly thereafter.

What makes MJ Arsenal unique from the other bubblers and rigs in the cannabis market?

We are proud to have designed and released the first purpose made blunt/joint bubbler product.

We are proud to have multiple patents—issued and still pending—for both design and function. The Martian™ introduced the world to blunt bubblers and really paved the way for our other offerings that followed.

While all of our joint/blunt bubblers comprise the same general concept, each one is very unique in both its aesthetic as well as its function.

We know our customers have vastly different preferences when it comes to shapes, colors, etc., so we do our best to be a Zara, of sorts, for glass offerings. We have something for everyone.

More recently we have released two products that created a bridge for MJA into the concentrates world.

The Merlin was launched in October of 2017 and is what we call an ACV (All-Consumption Vehicle) as it has the standard spout to receive most joints and blunts as well as a custom made quartz banger to convert into a fully functional recycler dab rig.

Our latest offering is Hydra, which is our first pure mini rig coming with a custom made 2mm thick quartz bucket.

A third unique aspect to MJA is we love special editions and collaborations. Last February we released the Cupid rollie bubbler to a great reception.

We only made 2000, half in green, half pink. Our latest drop is a collaboration with Empire Glass where we did a new play on The Martian™.

This limited edition, 200-piece-total bubbler has a glow in the dark Martian encased in a flying saucer, fully functional with UV reactive accents, to boot.

MJA’s main pillars are affordability, functionality, and innovation. We do our best to elevate what is ordinarily expected of a product and to provide unparalleled value and service.

Can you give us a couple of tips of what buyers should look out for when buying bubblers and rigs?

Josh Camitta: I think a huge factor is budget. Personally, I would love to be a true collector of fine glass. From the greats like Mothership to Banjo to many others.

However, I can not yet afford functional art of that variety. For the average consumer, I would say first decide what function you would like to have—Recycler, Klein, Fab Egg, Showerhead Percs, Diffusers, etc—then, based on which type of rig/bubbler you are interested in, go to a shop or two and check out some glass.

Look at connection points where pipes and tubes are connected to other glass, if you see little bubbles that means it was not the tightest job by the respective craftsman or company—more of a personal pet peeve, but most definitely telling of overall quality, nonetheless.

Place a banger or bowl in the female/male connection and ensure there is a snug fit.

One of the biggest QC errors we see is a connection that is slightly off. Also, this way, you’ll find out before you buy if the accessory or your new bong is a bit off.

Is MJ Arsenal coming out with new products soon? If yes, can you share some of them?

Josh Camitta: In mid-July we have some new glass to be introduced. A new mini rig to be released in mid-July as well as a new ACV (dabs and rollables) in the same timeframe.

Both of these products will feature our new packaging as well. We will be releasing photos of these shortly.

We are opening up into a new category with a specially made dab tool. We are in the mid stages of development here, and are pushing for a mid-July release also for this product.

Should production fall behind you can expect to see this in August/September.

I am very excited about this as I think it helps address a few pain points for the dabbers of the world. More to come on this!

What problems did you encounter in the cannabis industry?

Josh Camitta: For us, it has been a total disregard for intellectual property and unique products that a company creates.

The Martian™ at one point had over 2000 unique listings across DHGate and Alibaba, some even with my own image, a copyrighted image from my website, selling fake, poorly made, drastically undercut Martians—called “Martian blunt bubbler” in every ad. 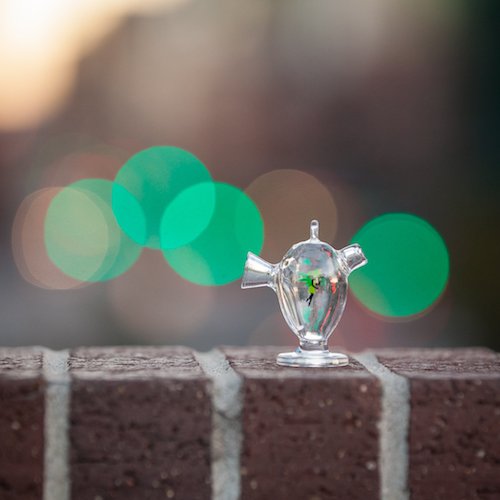 This was an unexpected curve ball, at least in the scale overall scale of thievery.

Still to this day, even with the IP that has been granted, it has been an uphill battle, even with companies like Amazon who are American owned and operated.

We have a fantastic legal team and recently had a new design patent issued that we are very excited to have at our disposal.

Can you give the ganjapreneur at least 3 tips in doing business in the cannabis space?

Josh Camitta: First, as with any business or major endeavor in life, perseverance is paramount. It is not if things will go wrong, it is when.

This is one of the few guarantees in life and one must roll with the punches and not sweat the small stuff in order to maintain the stamina to grow a business.

Second, never forget to take care of the home front—if your personal life is out of whack, if the people on your team are not happy—it is endlessly important to ensure that you are in-tune with the interpersonal matters of yourself first and foremost, but also those who comprise your company.

Some call it soft skills, but I simply refer to it as the Golden Rule. Every intercompany dynamic is different, but mutual respect from top to bottom is imperative.

Lastly, stay hungry. If you think a competitor does not notice the latest splash you made, think otherwise.

We as entrepreneurs must never be complacent and always assume that someone is right on our heels.

Entrepreneurship is something like a sprint pace at marathon distances.

Thanks Josh! We are grateful for the interview. Those are valuable lessons right there.

MJ Arsenal are makers of the original Blunt Bubbler™ and Joint Bubbler™. With patents both issued and pending on design and function and the use of innovative percolation technology, MJA’s unique line of portable, collectible glassware elevates the ordinary with an inventive twist on a time honored tradition. Often imitated but never parallelled, products like the Hydra and Merlin Mini Rigs™ include unique spill resistant designs while the coveted limited release Cupid, popular Martian, and playful Commander Tank warm hearts and cool hits around the globe. Collect one, collect them all —each piece fits in the palm of your hand. And, be sure to look for the MJA seal of authenticity!